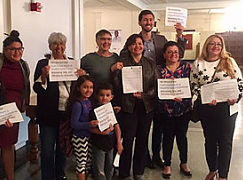 The Cook County Department of Public Health, Illinois, partnered with community organizers on worker and immigrant rights campaigns through its participation in the Collaborative for Health Equity. The Collaborative makes addressing structural racism and building community power an explicit element of its mission, with community organizers sitting on the Steering Committee and guiding Health Department work.

The Cook County Department of Public Health’s (CCDPH) Chief Medical Officer from 2006 to 2014 brought a commitment to social justice through personal and professional experience in the civil rights movement. She served on NACCHO’s Health Equity and Social Justice Committee, and as APHA’s President in 2010. As a result of her leadership, in 2013 CCDPH convened a voluntary staff development initiative using NACCHO’s Roots of Health Inequity course. This was an important opportunity for health equity champions to emerge from many levels within the Department, and these new leaders continued to support learning opportunities in the months that followed. As a vocal advocate of health equity work, the Chief Medical Officer encouraged CCDPH’s Regional Health Officer to join the NACCHO committee when she stepped down, and supported staff who sought to address power and racism even when other leaders were not on board.

Literature on health equity and social justice makes the case

Department staff read key texts like WHO’s 2008 Closing the Gap in a Generation: Health Equity through Action on the Social Determinants of Health — which explicitly named the uneven distribution of power as a determinant of health — and NACCHO’s publications on health equity, and screened Unnatural Causes when it was released. The Department’s Regional Health Officer also found inspiration in learning about social movements and public health’s role in these movements.

Beginning in 2007, CCDPH supported its staff in developing a Cook County Place Matters team, now known as the Collaborative for Health Equity (CHE) Cook County, a multisectoral collaborative to tackle the root causes of health inequity. Supported by the National Collaborative for Health Equity, Cook County Place Matters initially focused its work on food justice. In addition to providing technical assistance and opportunities for participants to travel, the National Collaborative funded a major report published in 2012 about health inequities in Cook County. Place Matters for Health in Cook County found that life expectancy across census tracts varied by as much as 33 years, from a high of 95 years to a low of 62 years, with major differences by neighborhood income. The team also created a supporting video highlighting food injustice in parts of the county. This report received significant publicity, including a public radio interview with CCDPH’s Chief Medical Officer (audio), and a press conference where the County Board President stated that “health inequities are unforgivable.” The county government’s public acknowledgement and approval of CHE Cook County’s work provided important political support going forward.

There are barriers to engagement with organizers . . . .it requires leaving the office, driving to a low-income neighborhood to meet with someone who might at first appear disorganized. But it’s worth it to switch gears if [these relationships] really help you build power for social justice.

The Collaborative’s mission statement explicitly names racism and the distribution of power as determinants of health:

“CHE Cook County works to eliminate structural racism so that all people of Cook County have the opportunity to live healthy lives.

Leadership of the Collaborative in its first years was comprised of representatives from health care and nonprofit service organizations. The first community organizer, from a Chicago neighborhood organization, joined in 2011. Initially the Collaborative focused on access to breast cancer screening and reducing rates of obesity, and then transitioned to work on food justice, centered on food deserts and healthy food retail. At the time, the national Fresh Food Financing Initiative caught the group’s attention. But the Steering Committee became increasingly frustrated with healthy food retail strategies, which seemed to have little effect on people’s diets and were being implemented with little community input.

The Steering Committee decided to move their efforts upstream and focus on wages and working conditions within the food industry. Steering Committee members knew that Restaurant Opportunities Center of Chicago (ROC-Chicago), an affiliate of ROC United that fights nationally for fair working conditions in the restaurant industry, was active and organizing workers in the Chicago Area.

Through his role on CHE’s steering committee, CCDPH’s Regional Health Officer began working in 2010 to build a relationship with the ROC-Chicago to find out how CHE could support their work. He first introduced himself to a ROC-Chicago organizer at a Real Food Challenge conference at a Chicago-area university, and they then met one-on-one for coffee. He made it clear that social justice was a public health priority for CHE. After this relationship had been established, ROC-Chicago began inviting CHE members to their meetings. Because many people who have experienced oppression distrust the government, CCDPH’s Regional Health Officer emphasized that he always prioritized attending meetings that he was invited to: “You have to make it a routine, you have to follow through, you have to prove that you are different from their past experiences.”

From there, CHE moved into supporting ROC-Chicago’s work with data and adding a health lens to their arsenal of arguments and materials. The Regional Health Officer provided data about the connections between wages, income, and health, and they discussed how to frame sexual harassment of restaurant workers as a health issue. CHE’s connections to national health equity networks helped elevate ROC Chicago’s work. In turn, the relationship with the Center helped connect CHE to social and economic justice organizations more broadly. In 2015 a ROC Chicago organizer joined CHE’s Steering Committee, formalizing the relationship and ensuring that they had representation and power within the Collaborative. There is now wide representation from social justice organizations on the Steering Committee, along with partners focused on research and clinical care.

Recently CHE has expanded into immigrant rights, particularly in response to anti-immigrant rhetoric and action following the 2016 presidential election. CHE supported a “Welcoming Village” sanctuary city ordinance in Oak Park, IL, and members created a fact sheet connecting immigrant rights to public health and attended rallies in favor of a strong ordinance. Community organizations with less capacity and fewer resources have begun turning to CHE and to CCDPH’s Regional Health Officer as partners who can draw connections between their campaigns and public health.

In the spring of 2017, Centro de Trabajadores Unidos-Immigrant Workers Project in suburban Cook County invited the Regional Health Officer to testify about the health impacts of raising wages to alderpeople (the equivalent of city council members) in Calumet City, a working class, majority African American city. CHE also worked to develop fact sheets when Calumet City had a ballot measure to raise the minimum wage and establish “one fair wage,” responding to organizers’ requests to connect higher wages to reductions in violence and infant mortality.

CHE’s work has now had an effect on the Health Department as a whole, helping to make health equity 1 of 3 community health priorities in WePlan 2020, CCDPH’s strategic plan, which was released in December 2016. Using NACCHO’s Mobilizing for Action through Planning and Partnerships framework, CCDPH conducted a Forces of Change Assessment with participants that included some of the organizers and community residents that had worked with CHE. The assessment found that “People without great wealth have power when they unite to advocate for their interests. This happens through social movements, advocacy of elected officials, and requires organizing.”

The WePlan Committee included a more traditional roster of people working primarily in various public sector agencies and social services. The results of the assessment convinced the Committee that they needed to learn more about health equity and identify how to lift it up in the plan. CCDPH invited NACCHO’s Richard Hofrichter to speak to the committee via videocall, and his presentation made the case even stronger. In the final WePlan 2020, the first priority is “Health Equity: To reduce structural racism, a root cause of health inequities, and advocate for pro-equity policies.” WePlan 2020 also states that “the Collaborative for Health Equity Cook County will serve as a source of leadership and strategic guidance in implementing strategies described in this plan.” 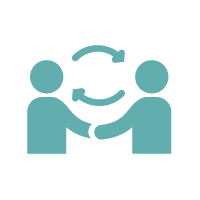 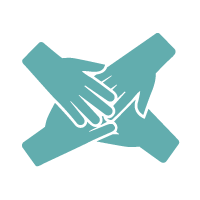